In 1929, John Matouk arrived in the United States from Damascus, Syria, seeking to import the most beautiful, highest-quality products from around the world for sale to U.S. consumers. John did not arrive empty handed. He had worked at one of the finest embroidery houses in the world—Olga Asta, located in Venice’s St. Mark’s Square—and he brought with him the extensive business and product knowledge he’d gained there. His wife, Maude Matouk, was a pioneering merchant for her time, having started her own business selling linens by appointment while in her 20s, and later opening her own store, Maude A. Borab, in Spring Lake, NJ. Her knack for cultivating relationships and managing people, along with her vast knowledge of the industry as a whole, made her a great asset and true partner to John. Their combined expertise helped John launch Matouk as an American business focused on quality and craftsmanship. Ninety years later, Matouk stands proudly as a global leader in luxury bed and bath linens.

In its early years, Matouk imported fine handmade laces and embroideries from Italy. John and Maude traveled together to China in 1936, interested in setting up production there as the Chinese began to produce their own hand embroideries, and thus expanding the ways in which they could deliver the highest quality products to Matouk customers. However, business and personal matters changed their course: World War II was approaching in the Pacific, and Maude became pregnant with their son. They returned to the U.S. to resume building Matouk in New York City.

By the end of 1939, John Matouk was a newly minted United States citizen who had started to change people’s notions of luxury linens. While most assumed linens could only be white or ecru fabric detailed with embroidery, John successfully imported and introduced solid color Irish linen tablecloths to American consumers. He opened the first Matouk factory in New York City in 1942, at the height of World War II. While linen was scarce during the war, he worked with Goodall Mills, a maker of men’s suit fabrics, and pioneered a special blend of mohair, rayon, and cotton, naming it Moraco. This became our first signature tablecloth and sold by the thousands.

The global nature of Matouk continued to evolve through the 1950s. Determined to bring our American customers the very best products, we conducted a search that extended around the world and ultimately led to importing fine sheets from the Philippines.

John’s son, George F. Matouk, joined the company in 1963 and, in 1964, added nylon satin sheets to the product line, including the famous “hairdo” pillowcase. George Sr. became President after John’s unexpected death in 1966. Matouk table linens also gained recognition during this period, most notably our Spanish burnout sheer tablecloths, which became a key component in the expansion of our table linen offerings.

Our popular nylon satin sheets from the 1960's.
The style that would become Margot, our archival floral print, re-introduced to the product line in 2019.

Key bed and bath product line introductions were made during this time period, including satin sheets, lightweight coverlets, and shower curtains, as well as the beloved archival floral print that we reintroduced last spring as the Margot Collection. In 1975, George Sr. opened a new factory in Mayaguez, Puerto Rico, where basic table and bed linens were manufactured until it closed in 2001.

George Sr. began transitioning the company into an important supplier to America’s best retail stores. Our products were recognized across the country for their quality, style, and brand integrity. In 1985, we relocated our New York factory and customer service to New Bedford, MA, where a large Portuguese community skilled in sewing and embroidery became invaluable Matouk artisans. During these years we introduced embellished towels and bed linens to the product line using Bonnaz (chain stitch) and Swiss hand-guided embroidery, all completed at our New Bedford home.

George Sr. in the sewing department of our factory at 136 Madison Avenue, NYC.

Our highly regarded Cairo towel, introduced in 1996.
George Sr. with his son, George Jr., who joined the company in 1997 and later became CEO in 2002.

The late ‘80s and ‘90s were a time of vital growth, with George Matouk Jr. joining the company in 1997 as we continued to refine our position in the industry. In this decade we renewed our commitment to the luxury market, specifically in bed and bath linens, and introduced the Cairo towel (1996), Diamond Pique bedding, and Savannah Gardens table linens (both 1999). As we accelerated our efforts to find the best global production partners for luxury fabrics and finished products, we also began to invest in modernizing our domestic manufacturing capabilities in order to increase flexibility and innovation. And we continued to form lasting relationships with fine retailers across the country who chose the Matouk brand as an important part of their businesses. 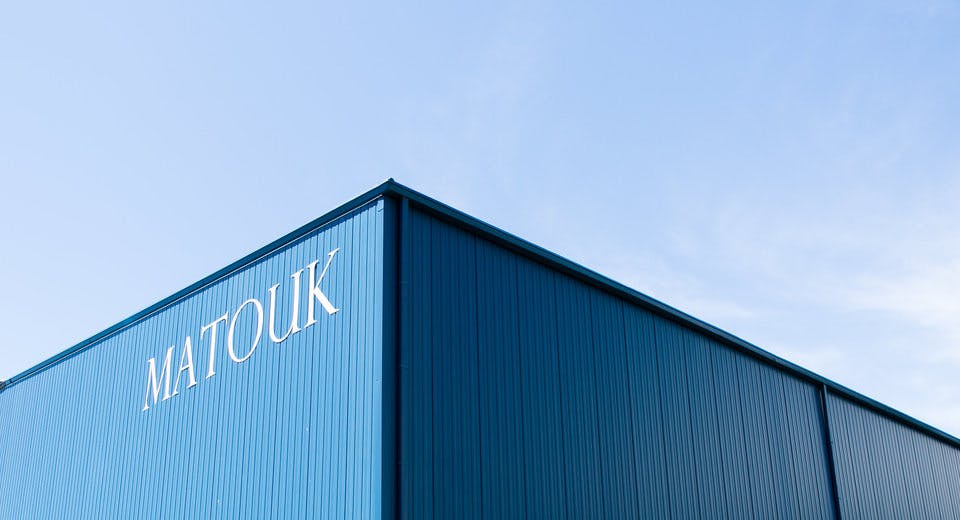 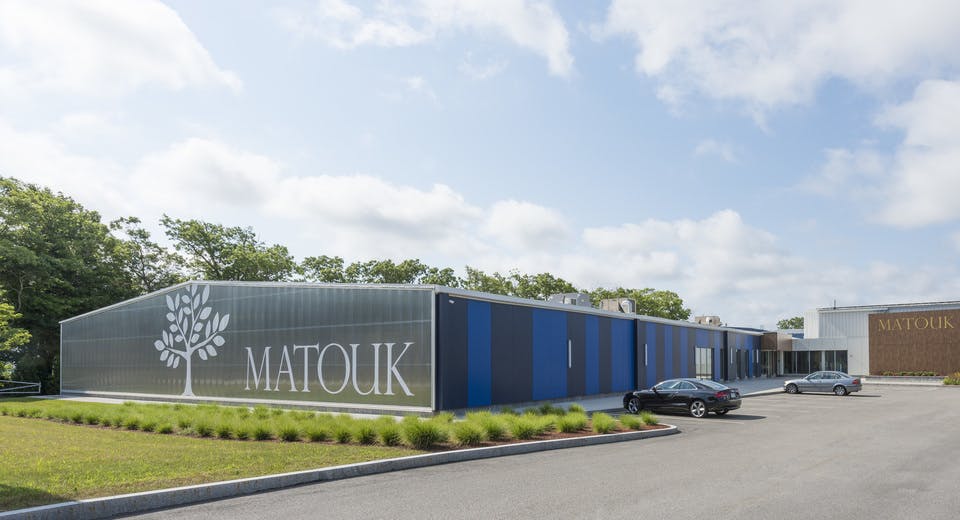 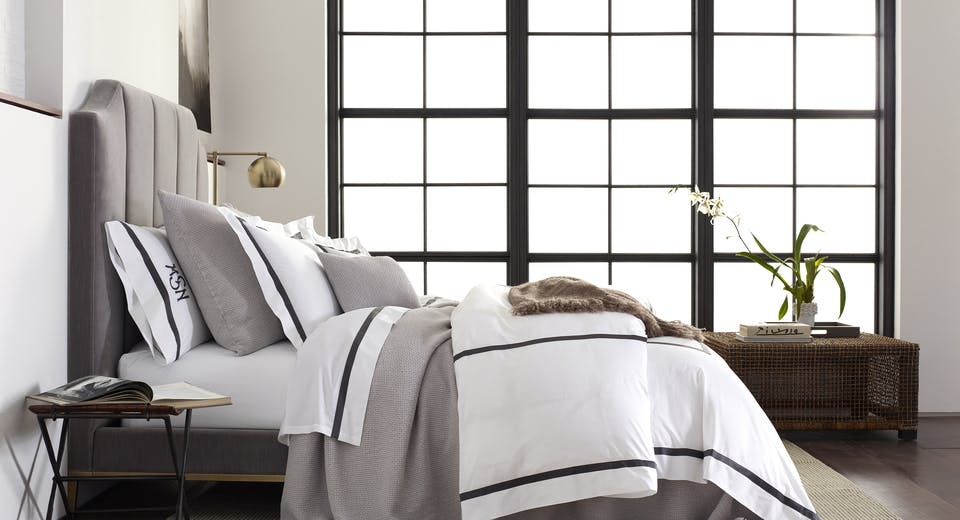 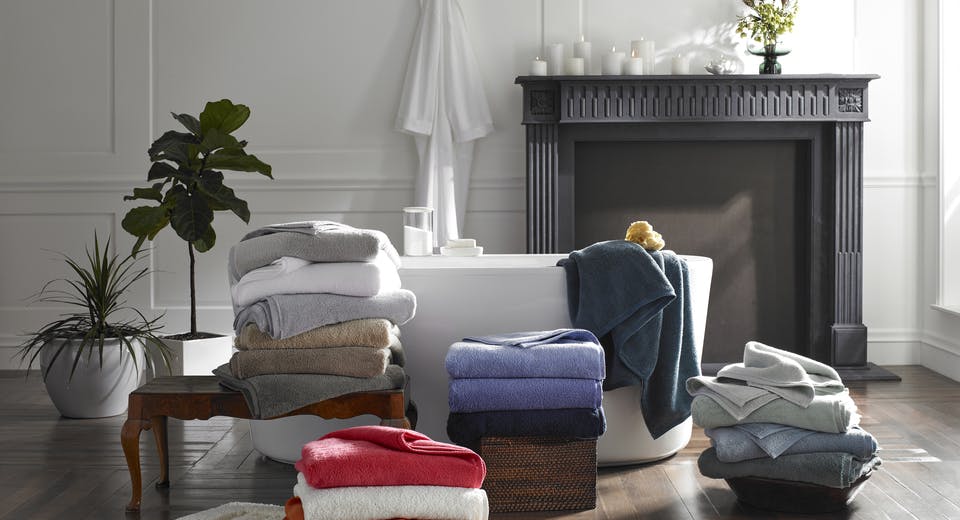 This key decade brought significant and exciting changes to Matouk’s leadership, manufacturing, and product offerings. In 2001, we closed the Puerto Rico factory and moved all manufacturing to Massachusetts; relocation to Fall River in 2005 further increased space and production capacity. George Jr. took over as CEO in 2002, and we launched a rebranding effort under the creative direction of Mindy Matouk, highlighting our unique position as a legacy American luxury brand with a contemporary sensibility. Two important product introductions came next: the Lowell bedding collection, still one of our most sought-after styles, and Milagro, which launched us as a leader in solid-color towels. The 2000s also saw our first significant creative collaboration with an outside designer, the artist Lulu de Kwiatkowski (2007); Lulu’s beautiful original prints would become a recognizable and popular addition to our brand. Continued partnerships with important interior designers helped bring our linens into homes across the country, and at the same time some of the finest hotels in the United States began outfitting their rooms with Matouk bed and bath products. 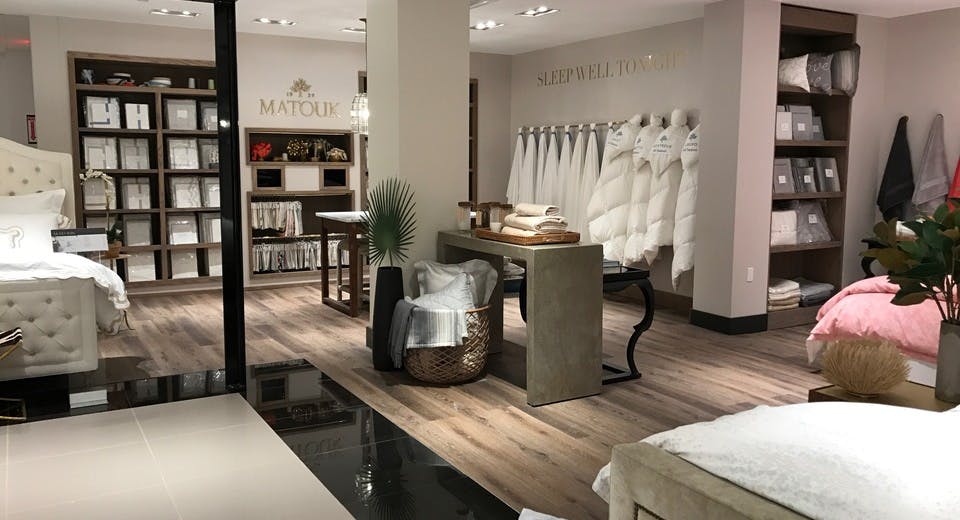 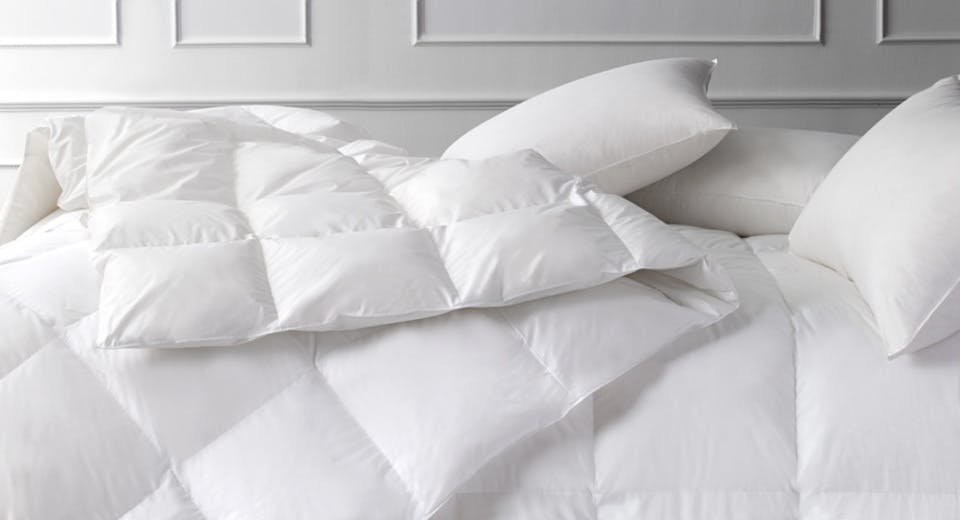 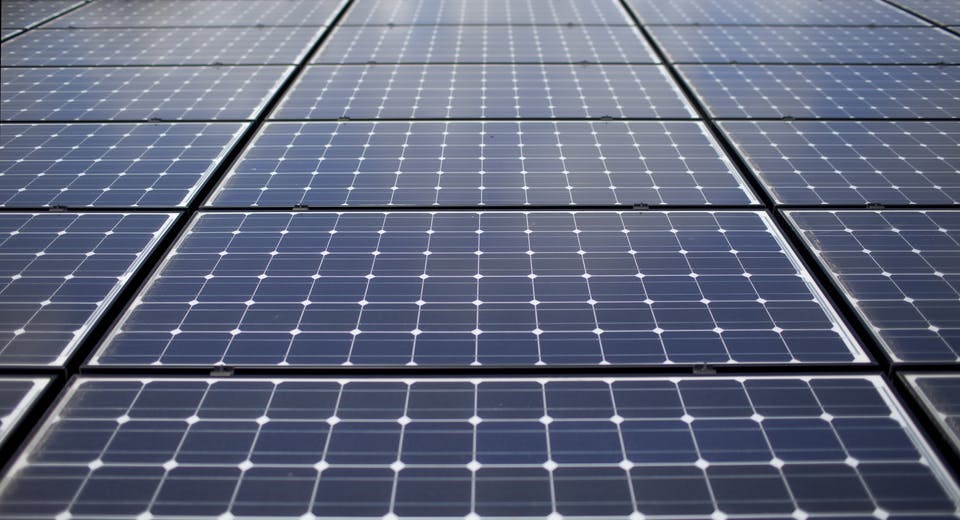 The past 10 years have witnessed growth, innovation, and a broader consumer reach. In 2013 we established our own e-commerce website, which we refreshed and relaunched in 2018 with a campaign known as From Our Home to Yours. Mindy Matouk, a force for years in shaping our product, branding, and voice, formally joined Matouk as full-time Creative Director, an echo of the dynamic relationship of John and Maude. Mindy oversaw our first retail shop within the Bloomingdale's flagship store in New York City as part of our partnership with the historic retailer. In 2016, we partnered with Dorbena, another family-owned company that shares our high manufacturing and environmental standards, to introduce the Matouk Down Collection. New structural investments included installing solar panels at our factory, expanding and renovating the Fall River campus, and opening a larger Manhattan showroom and office to better serve the interior design, retail, and hospitality partners who are key to our growth year after year.

We explore the presence of florals in the Matouk product line, and the power of florals in home design with Dara Caponigro, creative director of Sc...

We use cookies to enhance your browsing experience and to allow us to improve our website usefulness. By continuing, we assume you accept such use. Learn more about cookies and how to change your consent by visiting our

Unfortunately, the browser you use is outdated and does not allow you to display the site correctly. Please install any of the modern browsers, for example: